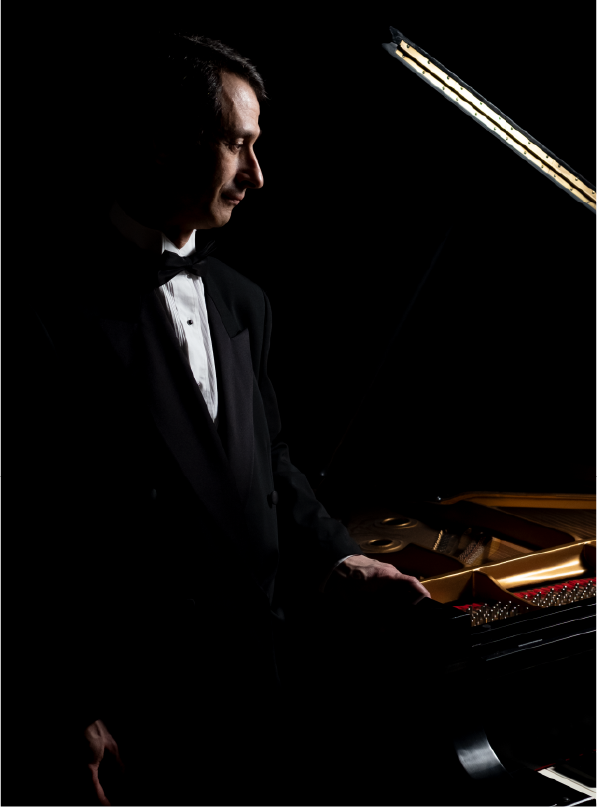 Alex Ruvinstein is a Russian-American classical
pianist. He won the XXVIII International Competition
in Salerno, Italy (1995) as part of the four hands duo
with O. Gurevich. Alex is a winner of the the Ibla
International Piano Competition in Ragusa, Italy
(1996) in the solo and four hands duo divisions, the
National Ukrainian Piano Competition for colleges
graduates in Kiev, Ukraine (1985), and other local
and regional piano competitions he participated
in as a student.

Alex was born in 1966 in Polyarnyi, Russia, above the Arctic Circle, and began his music studies at the age of five. In 1985, Alex received his Bachelor’s degree from the Uman State College of Music where he studied with Professor Viktor Patricio. In 1992, he received his Master’s at the Gnesin Academy in Moscow under Professor Vera Nosina. After receiving his Doctorate with Professor Naum Starkmann at the Maimonides State Academy in Russia (1995), Alex worked as Professor of Piano and an accompanist for cellists and singers at this Academy.

In 1998, Alex immigrated to the United States and made his American debut at the Union County Art Center in New Jersey. Since then, he has performed in various concert halls in Kansas, Delaware, Connecticut, and other states. His solo and chamber music performances include recitals at Weill Recital Hall at Carnegie Hall, The Greater Princeton Steinway Society, New York Library Concert Series, the United Nations Concert Hall, the Bechstein Piano Centre, and the National Opera Center in New York City, among others.  Alex was a member of the Memling Ensemble, directed by Metropolitan Opera violist Vincent Lionti.  He has appeared on Russian and Ukrainian Television. Alex works at SUNY New Paltz and Kaufman Music Center in New York City. Alex lives in Riverdale, New York with his wife Yelena and their sons, Michael, David, and Anthony.